Home    Blog    Working with the Grain by Katy Emslie-Smith
Blog

Working with the Grain by Katy Emslie-Smith 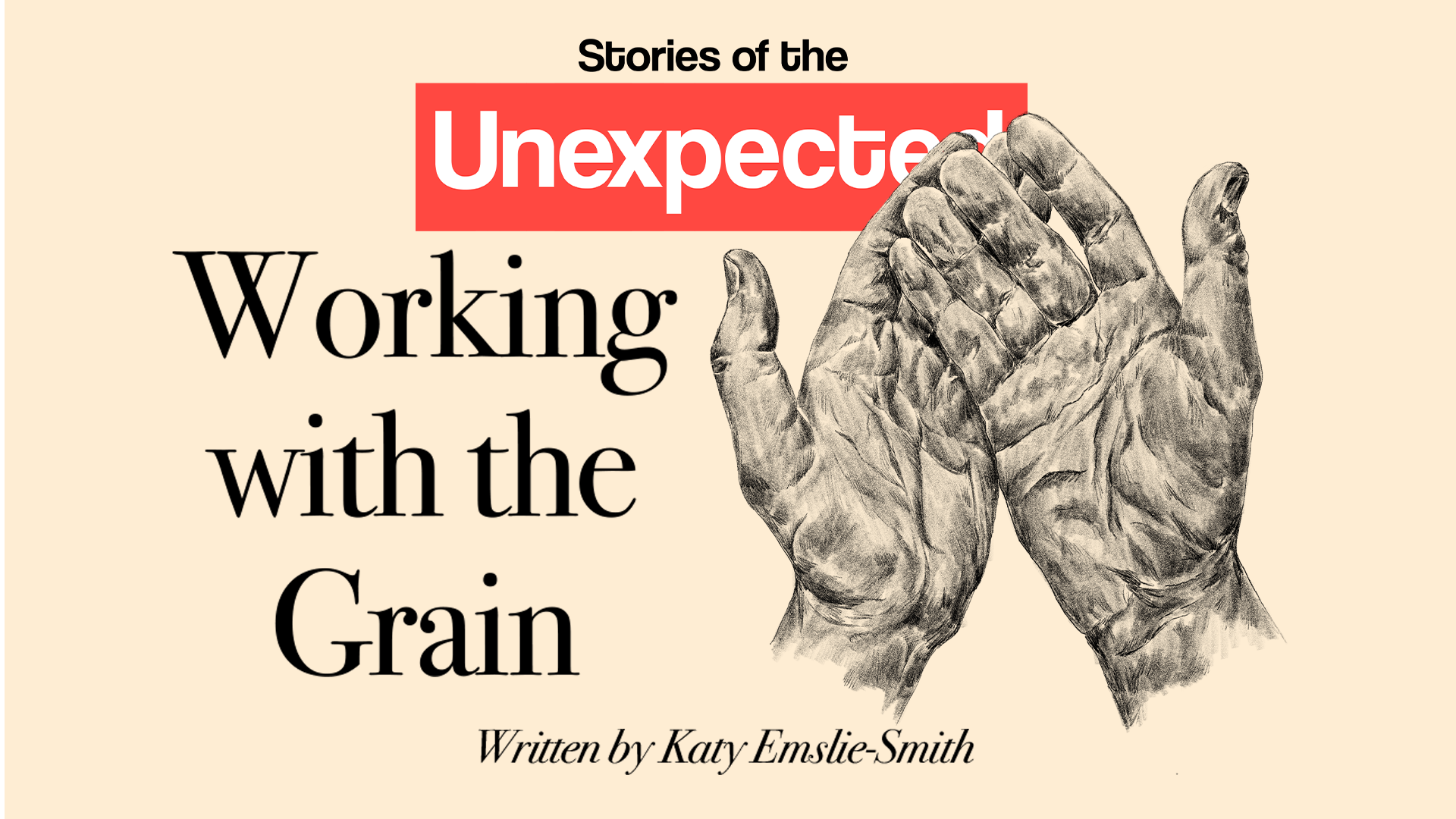 Listen to this story as a podcast: Working with the Grain

Working with the Grain

His hands froze when he first heard the news. They clasped the block of wood with tense tendons and joints fixed, white and motionless. His forearm muscles twitched as he resisted the impulse to raise his hand. It was several minutes before he noticed the large splinter that had embedded itself in the palm of his hand.

She rarely came to his workshop. Previously, by way of introduction, when they first met, he had brought her to see his trade and his skills. He demonstrated how he would assess the grain of a piece of wood, feel the density of its fibres, determine whether it would be best for a tabletop, a door lintel, a cart wheel spoke. He would weigh the wood in his hands and run his fingers over its undulating surface many times before deciding how to craft a new use for it. His choice of plane and chisel was slow and deliberate, a careful matching of his tools to the material. He worked as a man experienced, absorbed in long looking, a quiet craftsman in his ordered world of tidy tools and stacked wood. 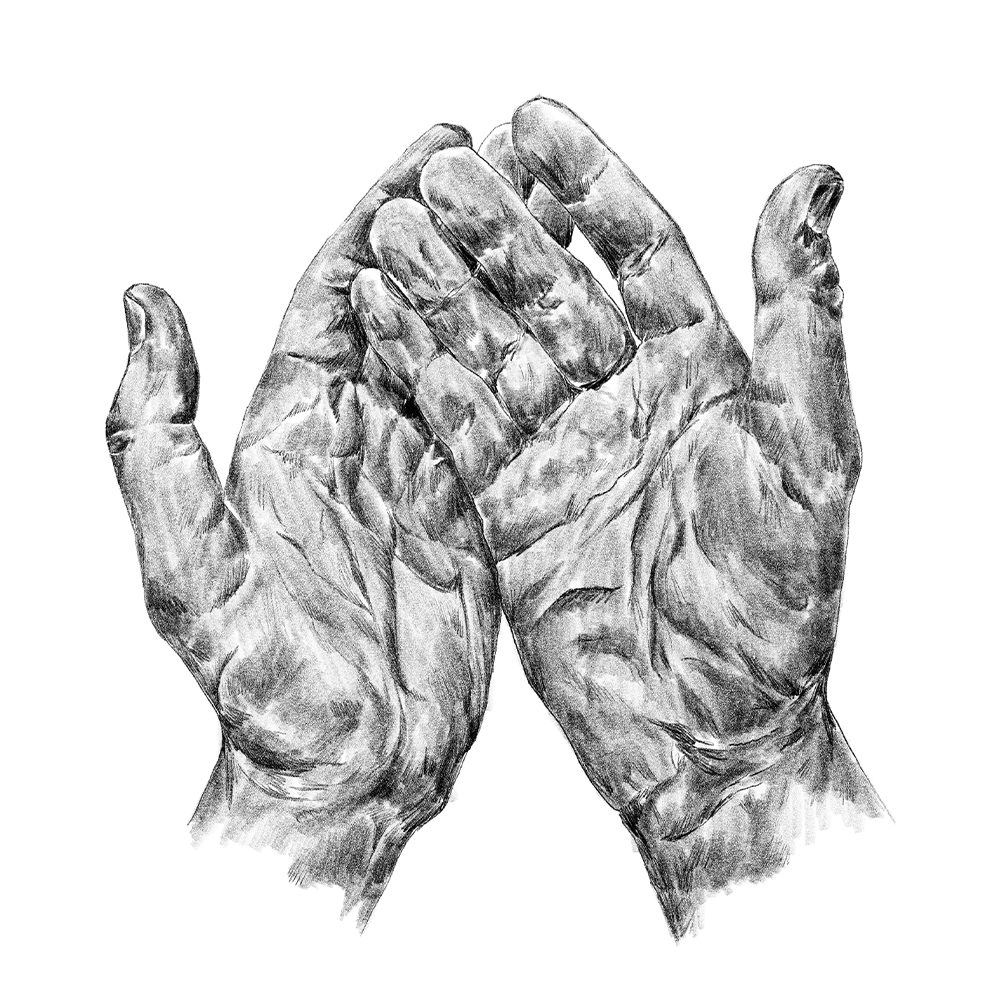 He remembered the day when she had burst in with urgent news, an excited message. He only heard three words. In that moment, he had felt as though every piece of wood had been caught and blown high into the air, twisted, turned and strewn into a jumbled heap of disorder and broken parts. He had turned to her after a period of silence and in a low voice said to her “Please leave”. As he said it, a deep pain rose in his chest as though his heart was squeezed and his breath choked within his lungs. A deep howl formed as he laid his head on the workbench, alone.

From then, he worked behind the locked door of the workshop. In the certainties of his skills, he tried to find peace. With a fierce concentration which set his arms tense and aching, he dovetailed tight joints and set the square mortices of frames and doorways. He hammered hard and his chisel bit the wood in his determination to construct order, to make straight lines and corners. Yet his tools were foreign in his hands. His hammer felt clumsy, having lost its easy arc, and his palms grew new callouses. Twice he cut a lintel too short.

His mind circled over and over with her echoing words. Questions intruded which he could not bear to answer.  He found himself sleepless, pushed and pulled around the margins of dilemma. Sense of betrayal combated with affection, anger wrestled with love, custom warred with compassion.   He imagined himself walking into the synagogue fallen silent, the air heavy with the judgement of speculation. Slowly, in early half lit hours, the pain in his chest grew leaden. A coldness grew there, as his conscience guided towards decision – quiet divorce.

His mind made, working late to sand away thoughts of a woman left alone to support a child, he knelt to view the smoothness of a tabletop, satisfied with the fineness of the sheen. This work complete, he laid his head on the honeyed wood, drowsy with long hours. The light played in a corner of shadows. A face formed, and words, which he knew rather than heard, settled in the dead place in his chest. As the child was named, he felt a warmth kindle in the cold.

He reached for a piece of wood, fine grained and kept for special purpose, olive from an ancient tree, felled in a friend’s garden.

All night he worked. His hands relaxed and slackened. His fingers loosened and ran freely, responding to the body of the wood. He could almost feel the life that had been drawn through the fibres of the tree, as he planed and sanded, smoothing the grain and refining it to a new form and new beauty, working as the wood directed his hands. He smoothed oil into the veins which ran like contours on the surface, a map on which he traced his new resolve to love a wife and raise a son. Like balm, the oil softened his skin and smoothed the callous until, on finishing his work, he looked to see his hands fine fingered, dextrous, at ease.

“A gift for my boy” Joseph said. As the early sun dispelled the shadows, he laid his head down on the bench and slept.