This week we will be reading the German short story 'Chicago/Shanty Town' or (Chicago/Baracken in German) by Georg Klein. This Story was originally written in German and translated to English by Ernst Zillekens for the book 'Short Stories in German' and published in 2003.

The story follows a German couple who are traveling in Chicago. The story is told from the husband’s perspective as he travels with his musically talented wife for a concert she is performing. The couple upon wandering around the city find themselves in a spot of bother and encounter a strange and enigmatic character in the form of 'Arno The Great Cold Warrior'. Arno is also a German and owns a small antique and hardware shop that just so happens to sell Nazi memorabilia. As the story unfolds, we slowly find out more about Arno and the couple.

The story is told in a peculiar manner, jumping back and forth through moments in time as though somebody is haphazardly recounting the tale to you in person, the narrator 'The Husband' maintains a conversational approach to talking to us the reader, as he recounts the strange things that happened the day when they met Mr Arno.

It is worth noting that not only does this story make mention of Nazi memorabilia but also focuses on the translation of Mein Kampf that the mysterious Arno is working on translating. Earlier in the story there is also some challenging use of language regarding race that is worth bearing in mind when reading the short story.

An interesting and challenging short story that I’m sure will leave us with plenty to discuss on Thursday at 3pm in the Book Club! 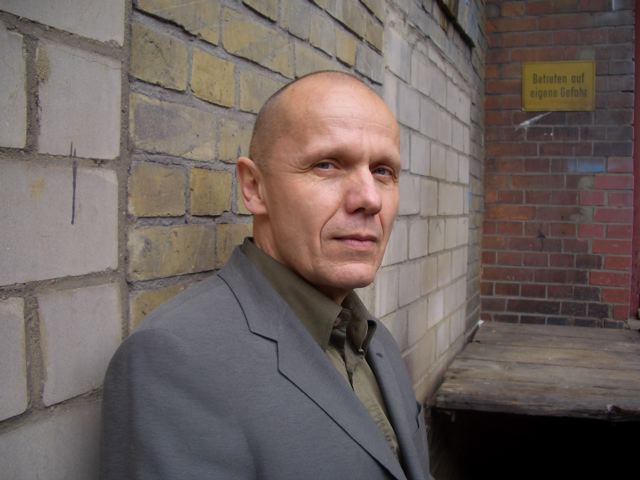 Georg Klein is a German novelist. Georg Klein was born in Augsburg in 1953. He studied Literature, History and Sociology in Berlin. His novels include Libidissi, Barbar Rossa and Sünde Güte Blitz. He was awarded the Brüder-Grimm Prize and the Bachmann Prize. For his novel Roman unserer Kindheit, published in 2010, he won the Prize of the Leipzig book fair. He lives in Jemgum. His wife Katrin de Vries is also a writer. In September 2012 he was keynote speaker at the British Council sponsored Edinburgh World Writers' Conference in Berlin. Having worked for many years as a ghost-writer Georg Klein was discovered in 2001 with his detective story ‘Barbar Rosa’.

Find out more about Georg Klein in this translation of his keynote speach at The International Literature Festival Berlin: Georg Klein: The future of the novel

"I want to begin by making a confession: I like it when novelists are dead. I find it pleasant to hold a novel in my hand and to know that its author is no longer among us. The spontaneous sympathy I then feel for both text and writer is even a little bit more heartfelt if the book is out of print; if I had to get hold of it secondhand from one of those dubious online dealers who offer as-new copies so cheaply that the cost of delivery exceeds the now no more than symbolic cost of the book itself."